Now lying on my bed at a Venezian hostel (20 €/night w/breakfast, this city is soooo expensive!) – ready to write down what’s been happening these last days. I had some time this week to explore my feelings a little bit, as after leaving Zagreb, I can say, I spent most of my time alone. There were people around me, but I didn’t have these longer conversations I had the previous weeks.

Now, add to that the fact that spending so much time on two wheels provides you with plenty of time to think, and mile by mile pass through the entire emotional spectrum. There were times of swearing and cursing half of the universe and there were times of love and compassion for the whole humanity.

So, there’s a question that keeps coming into my mind as I move forward and get to meet more people – “Why I wasn’t saving money and travelling for so many years? Just backpacking – exploring the world – check what’s around. This experience is so much broadening your horizons as to who you are – what is your place in this world. (Funny here, the day before yesterday I was trying to find a hostel in Venice, carrying my bike along the way. After like 20 minutes of riding and walking slowly into the narrow alleys of the old town, a waiter from a bar started yelling at me for bringing the bike into the island-city. So he told me something and I responded in Spanish that I didn’t know (that bikes were forbidden) and he got so mad at me and started shouting “no lo se puede – no lo se puede – bicicletta – Venezia – no lo se puede [=impossible not to know]. It was so normal for him to know that, because Venice is the center of his world – I had no idea whatsoever)

So, last Sunday I was writing from Zagreb, Croatia, and now, 7 days later I am in Venice, Italy. 3rd country in a week… Thinking how compact my days are, how full. I am a bit worried for the intense moments that go by and I cannot reflect upon them as.. oops, yet another is coming.. I haven’t yet found a way to put down my thoughts and feelings. Started recording but it’s not always so easy (now, for example, two Japanese are sleeping in the room), writing takes a lot of time and I can’t have my tablet at hand always. Now in the blog, I can’t write everything as you understand – there are some things very personal 😉 But I am happy for my electronic footprints.. I look back and I smile.

On Sunday the 22nd of November I woke up in Zagreb – much later than desired. After being a bit lost in the city I arrived at the very beautiful Christian Orthodox church of the Transfiguration of the Lord in Zagreb. I got there at the very end of the Service and I was really disappointed. You see, the whole blog-post preparation takes a lot of time and I barely slept on the previous Saturday night. [I am concerned about the blog and the social media – I was never into these, really. Still I am not sure I know exactly what hashtag is for or how to upload something on every platform simultaneously.. It takes a lot of time and I don’t know  -I mean, I kind of feel- but I don’t know who is actually reading all of these or if it worths it.]

Orthodox Cathedral of the Transfiguration of the Lord I

Orthodox Cathedral of the Transfiguration of the Lord II

On Sunday night I had a very nice chat in the hostel with Rana from Berlin 😉 and Will-sir-Willliam ;), from the USA. It had to do with.. well, is difficult to sum it up – parts of it: “Is travelling as getting-out-of-your-comfort-zone the right answer to all people on the question how do I make the most out of my life?” or, the fact that we are all  “products of our society” and at the same time free to chose are own path. Nothing very special, but  I really enjoyed it. [Will kind of represented the American Dream, while Rana the German realism – hehe]. However, I am mentioning it here because  it once more made clear to me that Hostels are like apiaries (μελίσσια) – full of bees!

On Monday morning  I left to Ljubljana, Slovenia. 130km – I was expecting some snow and some cold and I was prepared for them… What I was not prepared for was that one very “clever” roommate of mine that had unplugged the cable that powered the plug I had at my bed. So I woke up and saw my two batteries with their light still red – there were not charged at all. Urgh

I bought a looot of cookies and made it to Slovenia! Ljubljana was just adorable!!!

And now… the good stuff!!

On November the 26th, Thursday, I left Ljubljana to cross the Sloveno-Italian borders and reach Udine, where I would spend one night… It was 130km, with one mountain (similar to the Greek mount Ymittos) – It wouldn’t be that hard, I supposed… There was a surprise, though…

As I was cycling I was pondering what to do. I was very concerned, so after the first small climbing I was like “ok, no no – 130 km is a lot – you ‘ll stop here, at the first wi-fi cafe – before getting into the mountain – and if you don’t find a solution, you won’t leave”. But, I couldn’t see any proper cafe so I ended up, without actually realising it, climbing up the hill.. After some time, the view was so good I enjoyed it!

But then again I knew there were worse coming.. I ate a bit, I got mentally prepared and…

[So, luckily, at some point, when actually I needed it the most, add-e started working. And it happened in a very, I would admit, peculiar way. After 40 km that was ON but not functional, and at a point I had started to feel a bit desperate (saying to myself: “if this hill is that steep for more, I ‘ll need to step down, and start walking carrying the bike”), I shouted, rather arbitrarily, (έλα ρε add-e) “come on add-e”, and before I finish the “add-e” part, it “came back to life!!!]

After the beautiful sleep I left to Venice… 130 km without batteries, since I couldn’t charge last night… However, I had already checked and there was not a lot of climbing, so I was like “ok, eat well, drink a lot, concentrate, you can do it”! I also treated myself well…

And made it to Venice! How beautiful – how magical is this place?!
I spent a looot of time to find where to sleep and I was carrying my bike in stairs and bridges – really tiring a day! But Venice narrow alleys and small plazas paid me off! 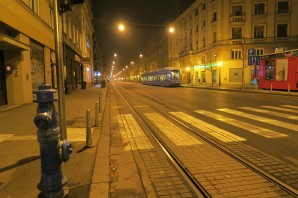 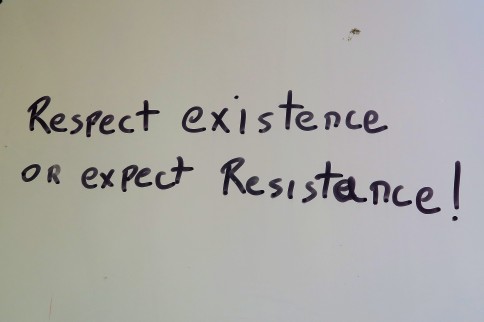 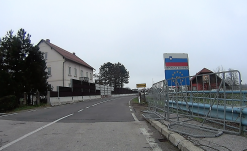 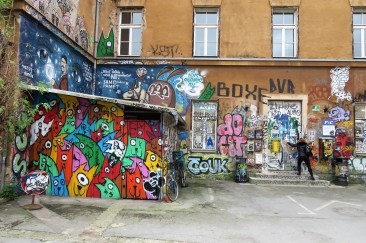 Such a nice place, really

This guy on the right was there for like 10 hours 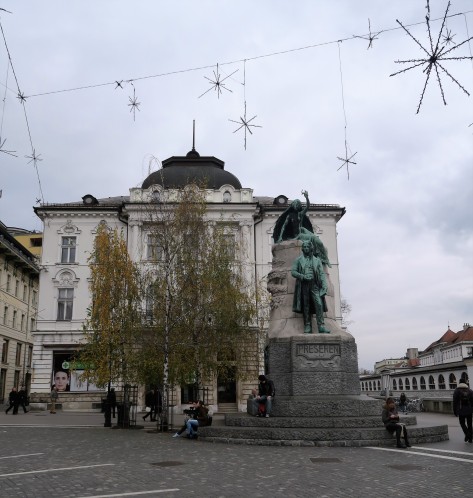 Right before leaving Ljubljana – Woke up and it was snowing!

Trying to figure out what’s wrong 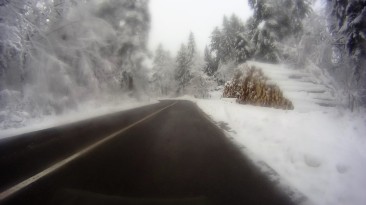 At that time I was afraid that later this snow on the street would be ice…. If I’d been there one week later, I don’t know if I would have make it 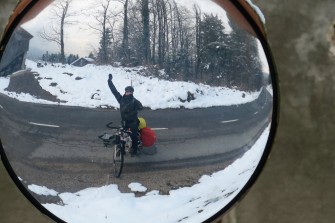 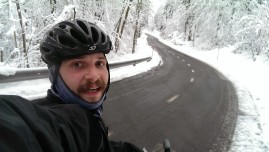 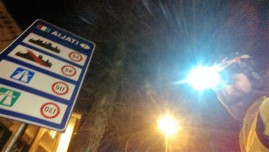 Italia! (there was nobody at the borders, I just crossed) 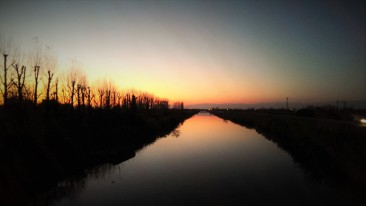 Found hostel after 2 hours!!! Nice to have a folding bike!